Cheap LED light panels, are they worth it?

LED technology has come along way in the past few years and LED lights are becoming increasingly common in the film and TV industry.  At the top end of the price scale there are brands like Litepanel that sell 1x1 variable light panels for 2,700 USD  or 2,300 UKP.  This is for a panel that can be easily dimmed, runs off mains or V lock battery and has a variable colour from tungsten to daylight.  Dedolight who are a very reliable brand, make a similar panel: the Tecpro Feloni, but almost three times less expensive (810 UKP) and when you include Chinese manufacturers these prices drop even further...a lot further.  So the question is: how low should you go?  Can you buy cheap LED panels and still get high quality colour for TV and video work?

I have used panels from both Litepanel and Dedolight - Tecpro.  They were both light weight, emit very little heat and they also have a very low power draw, which means you can run them off a V lock battery for hours.  When you are out in the field along way from power they make a very useful light source.  When looking at the way the light falls over the face, and the skin tones that they give, I felt they were both doing a good job and was pretty happy with them, HOWEVER, and this is a big however, the way a cameras senor interprets that light is different from the way your eye interprets it.

This can better explained with the images below.  On the left you can see the colour spectrum produced by various sources.  The scale represent the full colour spectrum that we are able to see. 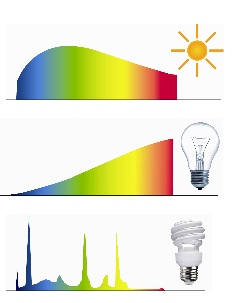 The sun obviously has the most clean source of light, where the full spectrum of colour is visible.

Tungsten is still the most reliable source of artificial light in terms of its colour rendition.  As we know, tungstent heavily favours the more reddy orange tones to the right of the spectrum, ending up with a light of around 3200 kelvin.

Other artificial light sources rely on a mixture of a few different seperate colours to create a kind of white.  As you can see from these spikes, this light is likely to emit a light that slightly favours blue.  Most importantly however, there is lots of detail in between these spikes that is missing.

LEDs are essentially doing what the energy saving bulb is doing, they take a number of different colours and mix them together to something that aproximates white.   To the naked eye the colour may look correct, but a certain amount of the colour spectrum will be missing, and the amount that is missing will differ, depeding on the quality of the LED light product.

So how does this effect us when lighting for a film or TV camera?  This is something that Ryan Fletcher from ARRI explained brilliantly at BVE in London this week.  In a demonstration Ryan showed a white screen lit with various different quaility LED lights.  Each light source was aiming to be a neutral white light, as you would expect to use in lighting for video.   As he flicked through the various LED lights they all looked pretty similar when lighting a white background, some were slightly cooler or more blue that others, but nothing too dramatic.  Next, he used those same LEDs to light a colourful peice of material and the difference was absolutely HUGE - and this is just to the naked eye.

This issue of accurate colour rendition is made more complex when we consider the camera's sensor.  Camera sensors are devided up, so one sensor deals with one type of colour.  This means that when lighting with a source that doesn't have a wide colour spectrum the camera won't be able to out put what the eye sees.  The video below, made by ARRI, shows the same scene, shot by the same camera under different light qualities.  The ARRI fresnal differs massively from the LED brands.

As cameramen we all obssess about cameras and lenses.  We buy the best camera kit we can afford, to give us the best image, but, in my opinion, this is money wasted if we then go and light with poor quality kit.   I am a big fan of the kino flo Diva light, it is my standard bit of kit for a key light and has been for years.  What this talk by ARRI  convinced me of, is to stick with this light.  There are situations where you can't feasibly do this, if you are away from a power source, and for that there is LED, but even then, it is essential to buy a product with a high CRI (colour rendering index).  I would only buy LED panels from a high quality provider (lite panel, Dedolight, ARRI) and would check video reviews on line to make sure their colour rendition is acurate, as compared to a tungsten light (which is still the most accurate form of artificial light).