Which DSLR / Camera Slider to Buy?

When DSLRs first started to be used for shooting video there were few camera sliders out there on the market, now there seem to be hundreds.  It is often hard to tell which are good just by looking at pictures on the internet.  I have used most sliders on the market, some of these are great when you first use them, but quickly deteriorate after use, others are better built and can handle frequent use and abuse. Here are some points to consider when choosing the right slider for you, followed by a review on the main camera slider manufacturers.

Points to consider when choosing a slider:

1) Smoothness of the slide.  This one may sound really obvious, however, most sliders feel smooth when you run the carriage up and down, it is when you mount a heavier camera and lens, or point the camera up or down creating an uneven pressure on the carriage that things can go wrong.

2) Durability.  There is nothing worse than investing a few hundred quid on a product, only to find it doesn't last more than 6 months.  Sliders can be fragile things that slide really well, until they have had a few knocks.  If the rail they run along suffers a small scratch or dent, how will that effect slide, if it cause a glitch or wobble, you may need a new slider.

3) Transportability (this probably isn't a proper word, but I don't care).  This is massively dependent on the types of jobs you usually do.  If you often work in a small 2 person crew, can you carry a full size 5ft Kessler Crane Cine Slider around with you together with your tripod and camera.  If you fly regularly with you kit, how are you going to pack it.  Smaller sliders can be broken down so the rail fits in with the hard case with the tripod, with large slider rails (such as Cinevate or Kessler) you will need a separate case and this will obviously increase you outlay.

4) Length. Again dependant on the type of shoots you go on, for me a meter is perfect.  I find a meter long slider means your rail is about the same length as your tripod.  This is useful as it is easy to pack it into cars etc.  For certain moves you can get away with only using half that length, but I find for really wide shots, or shots where you are moving towards the subject, a meter slide is useful.

Here is a quick round up on the sliders I have used and a few thoughts on them. 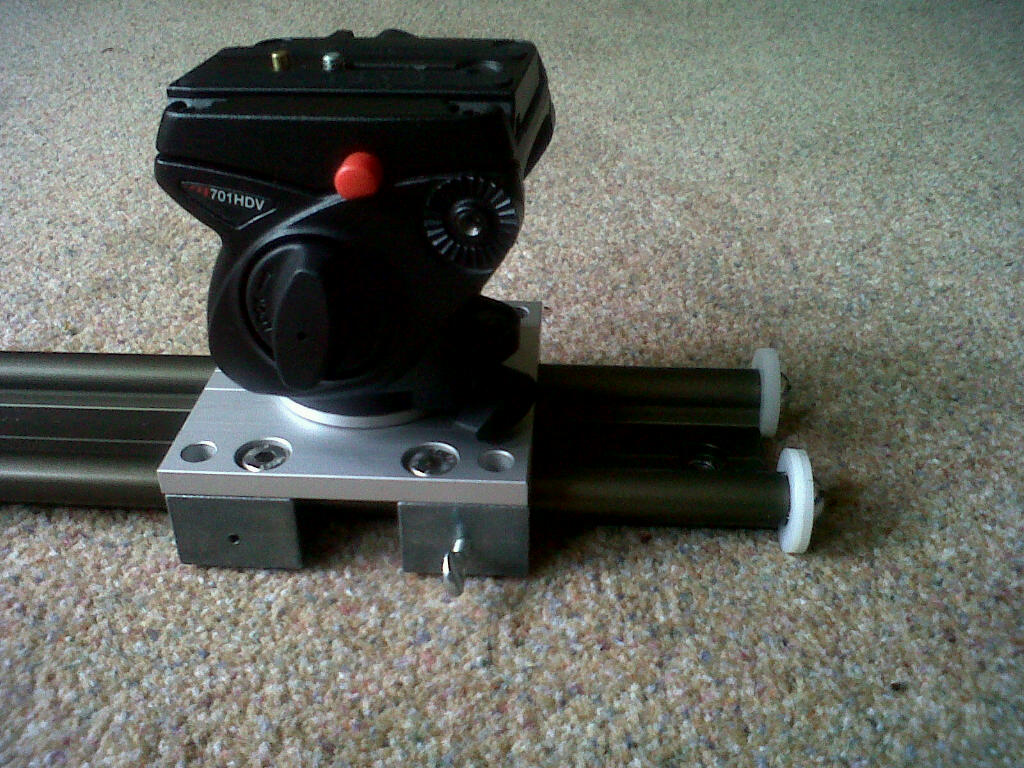 The first slider I ever bought was made from IGUS parts.  There are several companies making sliders from these parts, and they all work in pretty much the same way with a few add ons.  Glidetrack sell 2 versions of these HD and SD - HD, just being a heavier duty version.  The one meter version of the HD slider sells for around 350 UK pounds.  These sliders work on a "drylin" bearing, put simply this is a piece of material that doesn't use roling ball bearings, but is just a smooth material with no grease that slides along the metal.  When I first got this slider, it worked well for a while, but there are a few issues worth noting down here.  Firstly each bearing is screwed onto the sliding plate individually, if any of the bearings are knocked even slightly they will not be perfectly aligned, and the carriage will not slide smoothly.  I travel alot with my work, so knocks are unavoidable.  After every flight I would have to re align these bearings with an allen key. 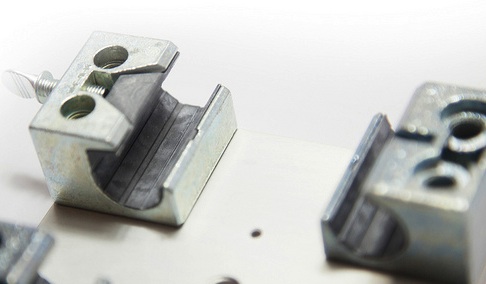 The next issue I had is with the locking mechanism, as you can see on the photo on the right, the breaking mechanism is a screw that screws directly into the bearing itself, after time this damages and eventually breaks the bearing. 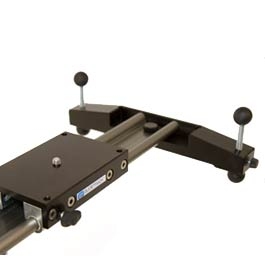 The upgrade to the Glidetrack is the Glidetrack Hybrid, the rails are the same but the carriage is vastly improved.  The bearings themselves are a combination of the original drylin bearing, and a plastic roling 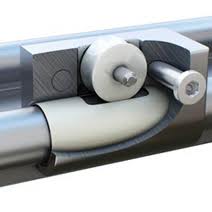 wheel.  This is much smoother than the previous version.  With the normal version the carriage generally works well when the camera is pointing horizontally, but as soon as it is aimed up or down, it puts stress on one side of the rail causing the slide to be jerky.  With the new version you can point the camera where you like and the slide is much much smoother.  The fact that all the bearings are housed in a solid steel box also helps out greatly.  You can now pack this slider away, throw it onto an aeroplane, get out the other side and the slider will still work.  These are more expensive at 420 UK pounds for the 1 meter version, but well worth the extra in my opinion.

Cinevate make all kinds of interesting gear for DSLRs to full size cameras.  Their Atlas 10 camera slider is really sturdy piece of gear.  This is their smallest and lightest slider, but it still has some considerable heft to it, and according to them it can carry up to 18kg in weight.  With the Glidetrack Hybrid above, the motion is so smooth that it is easy to over push the carriage, so it requires a really delicate touch, whereas the Cinevate Atlas has more drag on it, when you stop pushing the carriage it stops dead.  I know some cameramen prefer the Cinevate for this reason, but it is a personal thing, for me I actually like the feel of both.  If you travel a lot and are concerned with weight, the Cinevate is definitely heavier than the equivalent model from glidetrack, this probably helps with durability, but could be a pain with regards to excess luggage charges.  The Cinevate Atalas 10 sells for 650 in the UK including tax.  They are a Canadian company so are generally cheaper in the US and Canada,  (680 in Canada and 580 US dollars in the US). 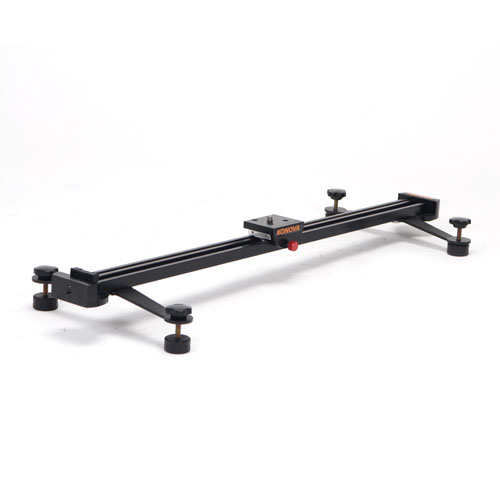 I am not a huge fan of Konova sliders, in some respects that is a bit unfair, as they are certainly cheaper than many of the other siders on my list.  The main issue I have with these is they are not hugely durable and are really only designed for fairly small camera set ups.  If you are only ever going to use a DSLR and you are only going to use small light weight lenses, then this could be a good option for you. 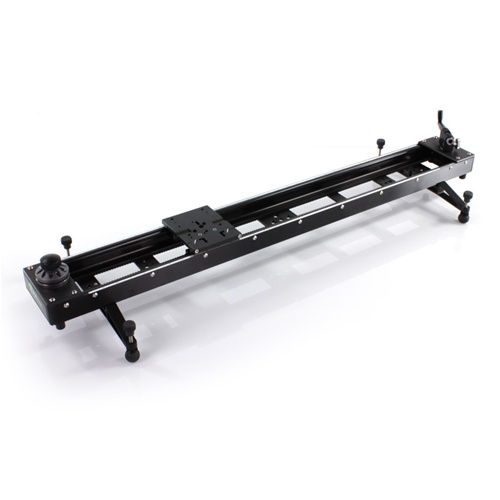 Eric Kessler is someone who has been really visible in the development of slider technology, if there is ever a band of cameramen heading out into the desert to record some crazy timelapse project, you can pretty much guarantee Eric Kessler is behind it.  It is probably for this reason that the Kessler slider is pretty well attuned to what cameramen want.  The carriages of these slide smoothly, I tend to use them manually like you normally would, just pushing the carriage along the rail, although there is handle that can be turned to move the carriage along.  This is a useful feature if you need to do really slow moves.  Another good point about these sliders is the tension screw, this allows you to add or take away drag from the carriage.  I find this useful when you are changing lenses as heavier lenses require different amounts of drag.  Kessler is a US company, so works in feet rather than meters.  This slider is 3ft, so just a touch under a meter.  Kessler also sell a whole load of options for this, for example you can add a high hat onto the carriage if you need to mount a full size tripod head.  Obviously all of this good stuff comes at a price.  The 3ft Cine slider sells for 1,200 USD (and this is without the feet, which cost an extra 150 USD), Kessler don't have a distributor in the UK so you would need to order it through their website  and pay the additional shipping cost and UK tax.  This slider weights 4kg or 9lbs, which isn't too bad considering it size.

I do quite a bit of air travel for work, so this is just a bit too large for me.  Kessler do make a hard case (around 400 USD) for this so you can easily fly with it if an extra peice of luggage isn't a problem.

Kessler have lots of options that are smaller and more portable than the Cine Slider.  Many are fairly short (around half a meter or 26 inches), but the stealth slider is a good option in my opinion as it is still around 1 meter long, but is lighter and more portable than the Cine Slider.  It doesn't have the crank handle, but I find a almost never use it anyway.  These go for around 800 USD, which isn't bad considering the quality you are getting. 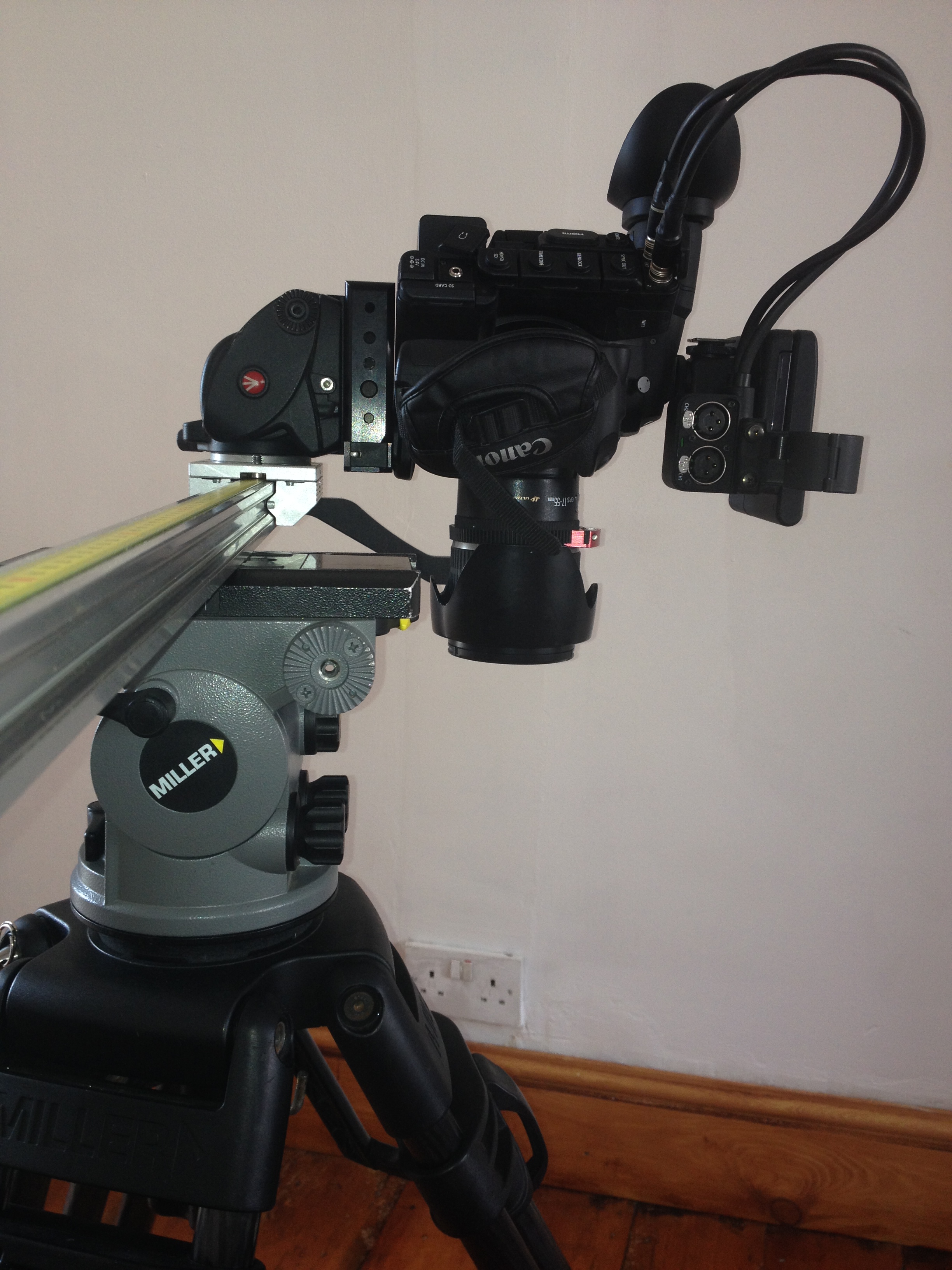 New to the market are a company called Slideshot.  When I first took this thing out of the box, I though it would be too small, something aimed purely at the DSLR market.  I was wrong about that.  Although slide carriage and the bar it sits on are both small, they are incredibly 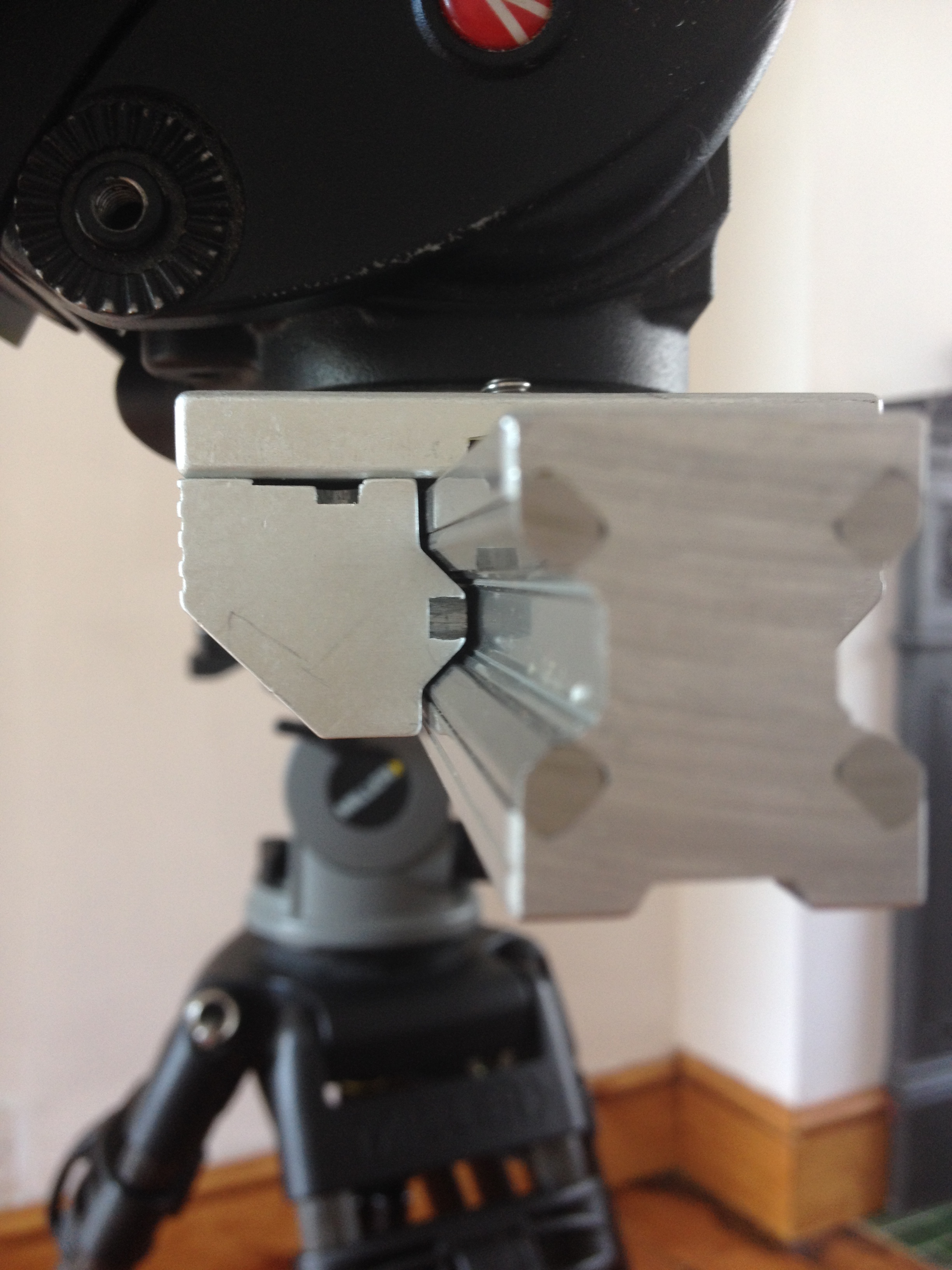 robust.  Most sliders do a good job of sliding smoothly when the camera is not panning or tilting and the camera is just pointing straight ahead.  Once you start pointing the camera up or down or begin to move it the unequal weight you are putting on the slide carriage often makes the slide mechanism stick.  This is a really common problem with sliders.  With the Slideshot this just doesn't seem to happen.  I kept moving the camera around, but at no point was there any difference in its ability to slide.  As you can see here, the camera is locked off at 90 degrees pointing at the ground, and the slide is just as smooth as if it was level.  This is a massive plus.

The carriage itself is a sturdy construction, with all of the parts made out of metal, so I reckon it could stand up to a hard life on the road.

Price wise, these things are very reasonable and go for around the 300 UKP mark depending on the model.

The only gripe I have with this slider is that there was nothing to prevent the carriage sliding off the rails.  However, I noticed on the slideshot website that the sliders do have this feature, so I guess this is something that has no been updated.

So which is the best slider to buy?  Obviously we'd all like the control and smoothness of Kessler, with the weight of the Konova, and the price of the build-it-yourself-with-Igus-parts,

but that isn't real life.  For me it comes down to a compromise between control, smoothness and portability.  I like the Glidetrack Hybrid because it moves smoothly, it is built to last, but I can still pack it down well and transport it.  I can remove the carriage and chuck the rails inside my tripod hard case, which means one less peice of luggage to check in, and it is light enough to carry around an clip onto the top of my tripod.

I also think it is worth buying an additional base plate for the slider, that way you can just fit the slider straight onto the tripod without having to screw a new attachement on every time you want to use it.