In the past I have used the Sony F55 for a day or two, but having just spent a week with it on a shoot, I thought I'd write a few notes on my experience.  This might help you out if you have a shoot coming up on the F5 or F55 and want a few basic tips and tricks.  (Users more familiar with the F55 will be better of looking a Alister Chapman's blog where the camera is covered in incredible detail.)

Shooting with the Sony F55 in the Saudi Arabian desert. 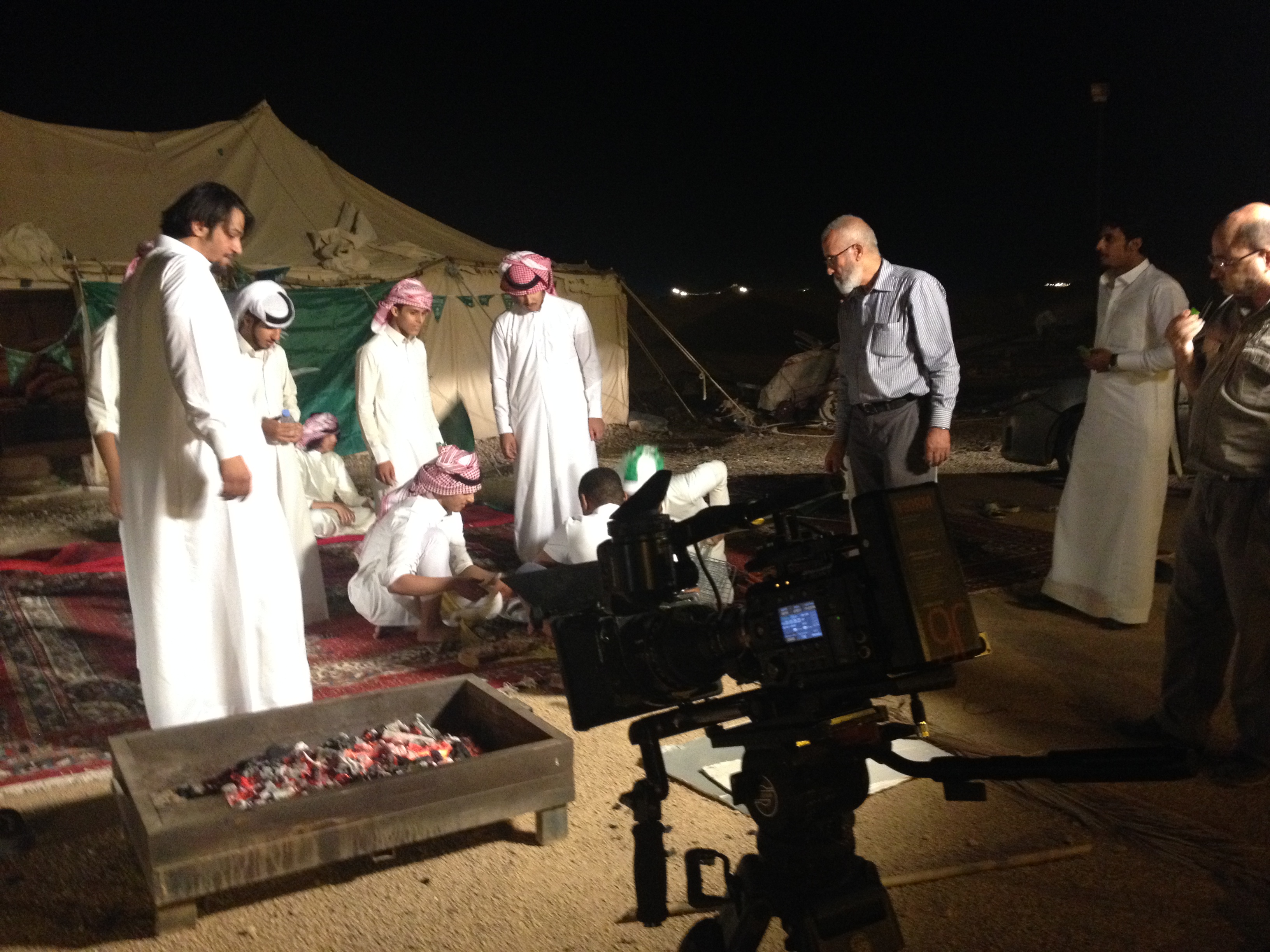 In order to get the best out of the camera and use the full 14 stops of DR available I shot with the S-Log 3 cine-ei mode.  This image is VERY flat.  Productions might steer away from super flat images if they are worried about time in the grade.  That said, there are plenty of LUTs available now that will bring your footage in to line pretty quickly.  To my mind if you are going to the effort of shooting on a high end camera, it is probably worth while using it to its full capabilities.  There is of course the option to apply a LUT to the output, but I was confident the editor was very experienced and would be able to get the best out of the image.

The first thing to say about using S-log3 in Cine-ei mode is that your white balance can now only be selected by the presets and you can't manually dial in the exact temperature (but then you shouldn't need to shooting Slog).  Changing ISO will not effect the image the camera records and it will continue to record at native ISO.  The only problem with this is I found very hard to focus, especially in low light conditions.  The easy solution to this was put a REC 709 LUT through the viewfinder.  (Canon C300 users will be used to doing a similar thing when using Clog together with "view assist".)  I found myself switching the 709 LUT on and off in the viewfinder occasionally so that I could check that the actual S-log footage looked as expected.  Another option would be to attach a small monitor to the camera and feed the slog output to it.

NB On the side panel of the F55 you can switch viewfinder MLUT on and off after selecting the "Camera" button.

I liked shooting with the REC709 in the viewfinder for monitor exposure and focusing, but found it a bit annoying that this feature couldn't be used when shooting high frame rates.  Once in HFR mode I was back to looking at a flat washed out image.  A solution to this is to assign the view finder "high contrast" mode to the side of the camera.  This helped with the focusing, but for low light shooting I found it actually made the situation worse.  Adding contrast meant even more of the picture was darker and focus was difficult.  Having the feature assigned to the side of the camera meant I could flick it on and off depending on the lighting conditions and this helped a lot.

On a side note, it did make me think, if I was going to buy the F5 or F55 I would definitely check out Zacuto's gratical evf to see if was better or worse than the Sony OLED viewfinder.

Shooting with the F55 in down town Riyadh, with plenty of lights to cause strobing. 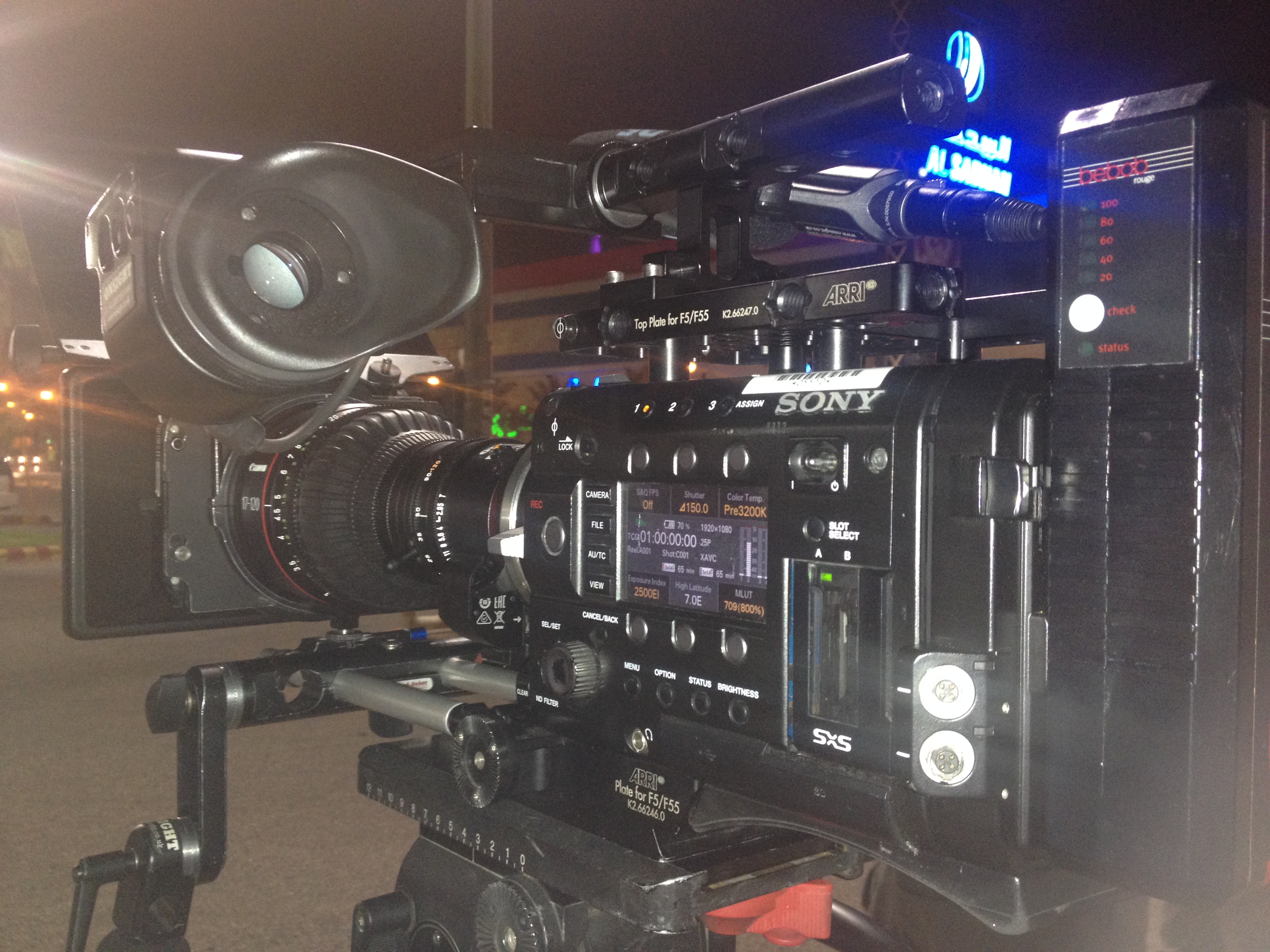 One place where the F55 really excels is it's high frame rate shooting.  I loved using this.  When you first try to switch the camera to a high frame rate using the buttons on the side of the camera, it will only go up as far as 60fps.  In order to access anything faster, you need to go into the menu and select HFR mode and switch it to from "off" to "Full Scan"  or "Centre Scan" if you want to crop the sensor.  In this mode you can only go as low as 66fps, so if you want to go back to a lower frame rate (such as 50fps or 60fps) you need to go back into the menu and switch the HFR mode back to "off".

The great thing about the F55 is that it is just so flexible here.  I was shooting for a 25 fps production, but was shooting in a 110 60HZ country, so immediately you have the issue of flickering lights.  However, the F55 is so versitile it is really easy to get around.  One option is to match up the FPS with the local country's electricity.  For 60HZ countries slow mo rates of 60fps and 120fps are going to offer less flicker.  Using these rates, it is easiest to switch the camera to shutter degrees, let the camera sit at 180 degrees and then you don't have to touch the shutter when shifting between slow and fast frame rates.

If however you can't shoot at multiples of 60 and you need to shoot at say 50fps to give you half speed for a 25p project, then I find it easier to switch the shutter to fractions rather than angles (my maths is terrible and it would take me too long to work out the angle needed).  With fractions selected for your shutter you can then just add the multiple of 60 here.  So if you were shooting 50 frames for 25p you would normally shoot at 1/100 shutter but being that the electrical system is 60 HZ you will get less flicker at 1/120.

Whether you are using your shutter at angles or speed it you can scrol down to "continuous" and dial in the exact number needed.  This is invaluble and allows you to adjust the number until the flickering disappears.

Over all I found the F55 good to work with.  It has a serious heft to it, especially as I was shooting with Canon's 17-120 PL mount, which is a bit of a beast.  I found it pretty comfortable for handheld work, using the Arri rig and the basic shoulder pad that comes with the camera.  The menu system is fairly large, as with all Sony cameras, so it is worth having a long look around it before shooting as there is a  lot that is very useful in there.  Assigning buttons to the outside to quickly access what you need is also a big help.