B4 lenses on Super 35mm cameras

B4 lenses that were made to work with 2/3 inch chip cameras like Sony's DigiBeta, XDCAM etc had an amazing range, but can you use them on a large senson super 35mm camera? 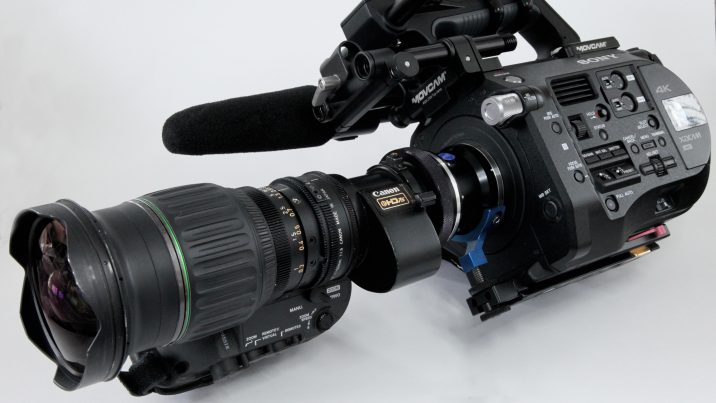 In short, the answer to this is usually yes, but with some limitations.

Firstly, let's look at why you might want to do this.

As well as having a huge range, B4 lenses also have a servo, for smooth zooms, large focus throws and are parfocal through the range and have external iris control.  In other words: they are made for TV.

The issue here is that with such a massive zoom range comes a cost: you are shooting through a whole load of glass and this has an effect on the quality of the image.  If you want to shoot an interview at say 70mm, your shot will obviously look much much better through a 70mm prime lens, or a 70-200mm zoom than it would though a B4 broadcast lens.

This drop in picture quality from a B4 mount lens manifests itself in several different ways: chromatic aberration, loss of sharpness especially at the edges of lens, flaring and a loss of contrast.

Another big difference between cine lenses and stills lenses versus a B4 video lens is the depth of field.  Although a Canon HJ22 might say f1.8 on the iris, it will not give you the same effect as shooting a 50mm prime at f1.8.  The reason for this is that crop factor: a large 4 times.  Even wide open at 1.8 there is still a pretty big depth of field on a B4 lens.

There are instances when you absolutely need a huge range zoom and this is when converters B4 to PL, EOS, etc are useful.  You could of course just use a large cine lens, but the costs will be pretty huge.   I have used Arri Aluras several times where range is needed, but they have no where near the range of a B4 mount lens, and a pretty pricey.  The Arri Alura 18-80 T2.6 costs upwards of 20k to buy and several hundred a day to rent.  If you want a bigger range, the costs go even higher.

So with that in mind, let's take a look at the cheaper option.  B4 mount lenses have been around for years, they aren't quite obsolete just yet, as they have lots of uses in sports and news etc, but you can still pick up used ones pretty cheaply.

So how do we make a lens built for a small chip camera work on a large chip camera? There is a pretty big difference in the chip size of a 2/3 inch camera and a super 35 sensor.  you can find out more about crop factors here.

In the image below I have layered various sensor sizes over each other so you can see the relative difference.  If you are looking at this full size (on a desktop computer or ipad) then the images of 4x bigger than actual life size.

In order for a large Super 35mm camera sensor to work on the smaller coverage offered by a B4 lens you need to zoom in, this can be done digitally, if you have a 4k sensor, or you can use optics i.e use the doubler glass on the zoom lens.

The next thing to consider, is whether there is enough room for the B4 mount to connect in front of the camera sensor, without hitting something.  In the case of the DSLR, there may not be enough room as it could hit the mirror.  If you have a mirror less camera, then it is more likely that a converter will work.  Cameras like Sony's As7 range or Panasonic's Gh5 GH4 etc are more likely to work.

Until recently the Canon C300 mkii had no audio when in centre crop mode (as presumably centre crop was only designed with slow mo in mind).  Luckily a newfirmware update has solved that issue, so you can no use centre crop mode and shoot at normal speed with audio.

So where can you get the adapters?

Adapters vary depending on the camera they are for, but often they cost well over $1000 so they might be worth renting if you don't see yourself using them much.

MTF are the main adapter makers for this type of lens, although I recently discovered German manufacturer G IB/E optics HDx35 adapter, which my rental company highly recommend.  IB/E optics HDx35 convert B4 to PL mount, it looks like a good product, but I haven't tried it first hand.

MTF I have used several times and can be bought at the links below.

B&H stock b4 to Canon adapters

as well as various B4 to Sony adapters

Below Dan Chung from Newshooter.com shows the MTF adapter on the Canon C300 mkii