Firstly, before getting into this a word of caution.

Using the idea of a "crop factor" is slightly tricky, as to have a crop factor you need a reference guide, from which perspective all other sensor sizes are cropped.  With the advent of DSLR filming and "full frame" 5d and 1d some people talk of all other smaller sensor sizes as being cropped.  However, the  smaller sensor size of Super 35 has been a standard in the film industry for years.  For example, when working on an Arri Alexa most people from a film and TV background don't think of a 50mm lens as having the field of vision of a 70mm lens that  has been "cropped into", for them a 50mm lens has a field of vision they are used to on an Alexa, and they are not comparing it to the image you would get on a 36 x 24mm full frame sensor such as the 5d or 1d.

Other people may come from a 35mm film background, especially photographers.  These people are used to "full frame" 35mm as a reference point.  For these people super35 is a crop, and so the field of vision a 50mm lens provides on a super35 sensor is narrower than they are accustomed to.

Interestingly, there has been a move back towards full frame cameras recently.  Arri launched the Alexa LF and the LF mini (with a sensor size slightly larger than full frame) and Canon brought out the C700FF and more recently the C500mkii, both of which are full frame (38.1x20.1mm).  Sony have also got in on the act with the FX9.

Sensor Size 22x12mm - 26x15mm aprox (these have a crop factor of around 1.4 to 1.5 as compared to full frame cameras although sensor size varies slightly in this group)

In the image below, I have illustrated each sensor size as a comparison tool.  This image is 4 x the sensors actual size, so that the relative differences are easier to see.  As you can see, the difference between the yellow from the 7d to the red Super 35 is small even at 4x.  This is somewhat confusing as the actual sensors don't have the same aspect ratio, as they are also used for 4:3 recording or photos in the case of the stills cameras.  (To see the changes to the field of vision when in movie recording mode, see the next picture.) 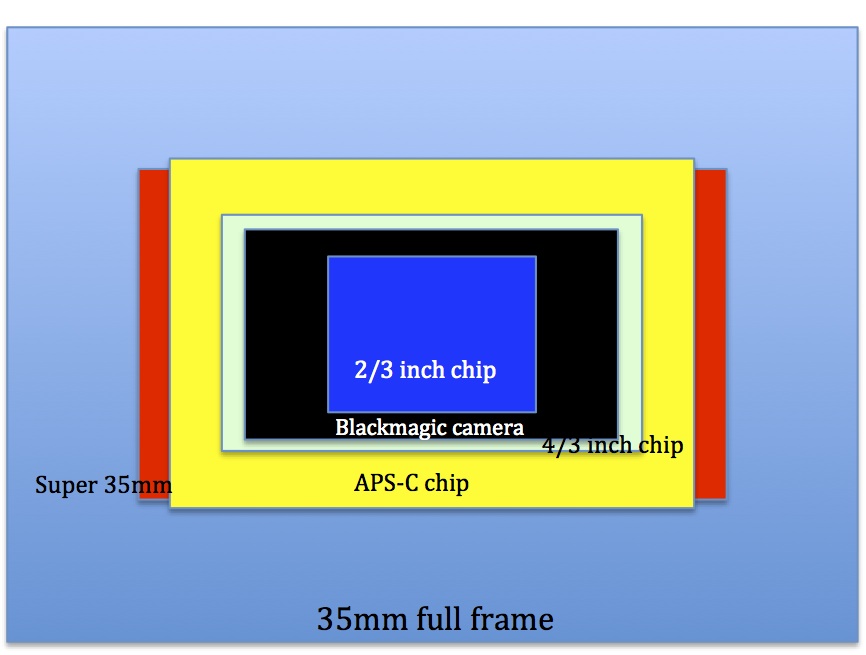 This next image demonstrates the relative field of vision you would get from each sensor.  All of these are now 16:9 as the stills camera would be shooting in video mode at this aspect.

With the advent of 6k and 4k technology, cameras are able to shoot at 2k using a crop of their own sensor.  The great thing about that is it opens up the possibility of using lenses designed for smaller sensors or film, or you can use a full frame lens and gain a greater field of view and more flexibility.

In this next section I'll touch on the idea of mixing lenses, specifically putting lenses designed for a 2/3 inch camera on a super 35 sensor.  There are issues with quality when doing this.  2/3 inch bayonet mount lenses are not going to give you cine syle optics, typically they'll give a look a lot less sharp than you are used to.  However, when it comes to zoom lenght and price, they

Since there is a massive difference in the crop factor of 2/3 inch cameras and single chip cameras, I thought I'd write up a few lens range comparisons.  Many of us are used to working with Canon broadcast lenses such as HJ11, HJ22 etc, and since these are designed for B4 mount, 3 chip cameras the crop factor is pretty large.  Here are a few notes on how different lenses compare.

If you are interested in using a B4 mount lens on a super 35mm camera, you can read about that and the adaptors need here.

This next table illustrates the difference between a full frame camera and a APS-C chip camera such as a 7d.

Interestingly the HJ 11 full focal range is 19mm to 415mm (including the doubler) so if you wanted to have the same focal range using a single chip camera with eos lenses, you would need pretty much every eos lenses they make.

It is possible to use B4 mount broadcast lenses on single chip cameras with a B4 to EOS or PL adapter from MTF.  Since Super 35 sensor cameras have such a large chip compared to the broadcast cameras, the lenses will only work with the doubler on (otherwise you would have a massive vignette.)   I have done this a few times, although I am not a massive fan of it as you are obviously shooting through a layer of doubler glass and the optics aren't that great, although in terms of practicalities it does work.  MTF make a good variety of adapters, which you can buy from B&H.

This is the range such lenses would give you on a super 35 chip camera:

Also from Abel Cine is an intersting tool that automatically calculates the field of vision on any lens size you choose from most of the major cameras in use.