The C300 has 9 scene files that can be used, or turned off all together.  These files are accessed via the "picture profile" button on the side of the camera.  These are labelled  C1 to C9.   Additional custom profiles can be made or uploaded from the internet, put on an SD card and then loaded onto the camera.  These files then appear as S1-S20 and can be loaded onto the camera, or just used directly from the card.

The last 2 of these in camera profiles are locked as standard:
C8: Cinema (This uses the Clog gamma curve for the greatest dynamic range.)
C9: Eos standard (same look as the standard picture profile on Canon DSLR - this tends to give fairly accurate colours, but it is also pretty punchy with regards to contrast and saturation.  I tend not to use it for this reason as it looks too vivid and blows highlights easily.)

The cinema profile using the Canon Clog gamma curve gives you the flattest image, with the greatest dynamic range.  This profile does get the most out of the camera, but requires a fair bit of grading in post. 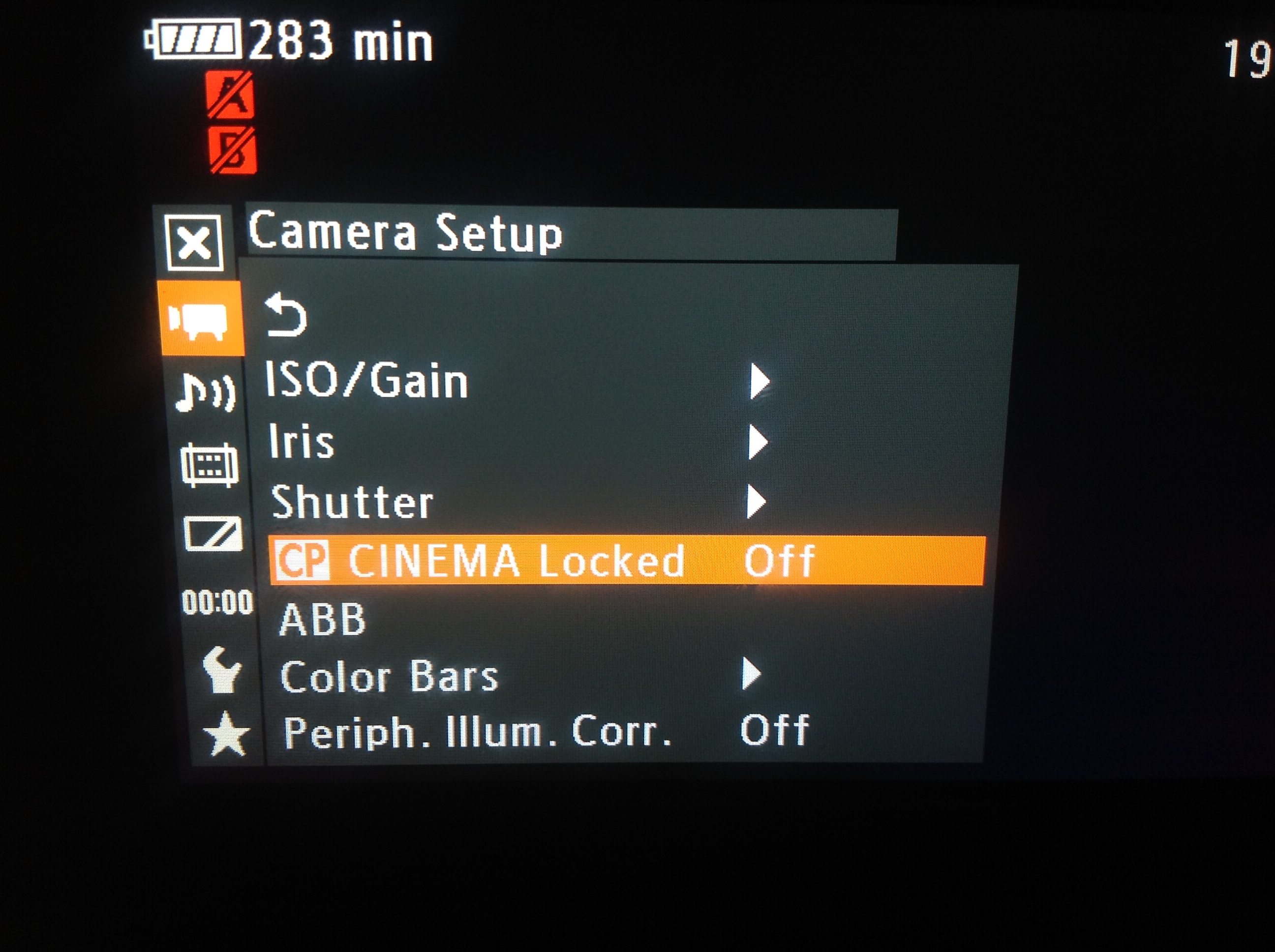 This will then disable the CP button on the side of the camera, (Until you go back into the menu and turn CP lock off).  CP cinema locked means you are using the standard Canon Log Gamma as it comes from the factory, this way you can guarantee you are using a profile that hasn't been adjusted by another user.  There is however a small amount of sharpening added when using this route.

With cameras such as the Arri Alexa, you can assign a REC 709 gamma curve to an evf, to give you a more standard looking picture to work with.  The C300 has a similar function when using Clog called view assist.  I like using this in the view finder so you can get an idea of how the image might look when graded.  I find this really helps with focusing.  For more focusing help check out this.

Inside each of the 9 scene files there are many of the usual elements you would expect that you can edit: gamma curve, black, black gamma, low key saturation, knee, sharpness etc etc.  Alan Roberts, a highly respected technician from the BBC, has written a paper on his recommended settings, I have noted down some of these comments in quotes below - followed by AR.

There are 8 Gamma curves to chose from:

The final option is to shoot with no picture profile at all.

This test from Kevin Richie on vimeo shows each of the gamma curves.

If there isn't time for a grade and client wants a baked in look, for a quick turn around edit, it probably makes sense to go with Normal3 (REC709).  Here is what Alan Roberts has to say on this: "For broadcast purposes either Gamma 3 (ITU-709) or 4 (BBC 0.4) is perfectly acceptable. The BBC curve always produces more accurate colour rendition, but the 709 curve is normal for HDTV shooting"

Either you can make your own adjustment to create a custom picture profile, or download one from one of the many C300 users out there.  I have used several of these which I prefer to use over the Normal 3 profile.

DP Brian Weed made some alterations to to the Cine, Log, and Eos Std picture settings, that means there should be less grading needed in the edit.  These can be downloaded from the links below, or to read more about each CP log you can read up on them here.

Another CP profile that I like is from Australian DP Roger Price.  He has taken the recommendations of Alan Roberts and produced a CP profile that can be used straight out of the camera with no grading.  Great for fast turn around shoots.
A video of the profile, and a link to download it can be found here.

Abel Cine, who are a great resource for information about camera equipment, have several different picture profiles for the C300 for shooting in different conditions.

For those who aren't familiar with the C300, here is a quick video I made to explain how to change the different custom picture profiles:

Also, if you don't own a Canon C300 and want to get familiar with these picture profiles before a job, Canon have a C300 simulator on line, so you can see how to load up various profiles for yourself.

Finally, a point made by Alister Chapman on twitter recently was that shooting flat isn't always best.  It is an interesting point as so much has been made of shooting with the flatest profile possible recently.  The point is that the camera only records a certain amount of data per second and using up all of this data with the widest possible dynamic range doesn't always make sense.  Not every scene requires a massive dynamic range, especially if you are shooting inside a studio.

UPDATE:  With the latest Canon Update you now have a further profile Canon's Wide Dynamic Range.  This image give you a brief idea of how the profile will perform.

There is more info on the latest fimware update here.