peli cases for tv cameras and the canon c300

There are two things without which all TV and film production would cease: gaffer tape and Peli cases.

Checking into a hotel in the Carribean. Still plenty of room on that cart. 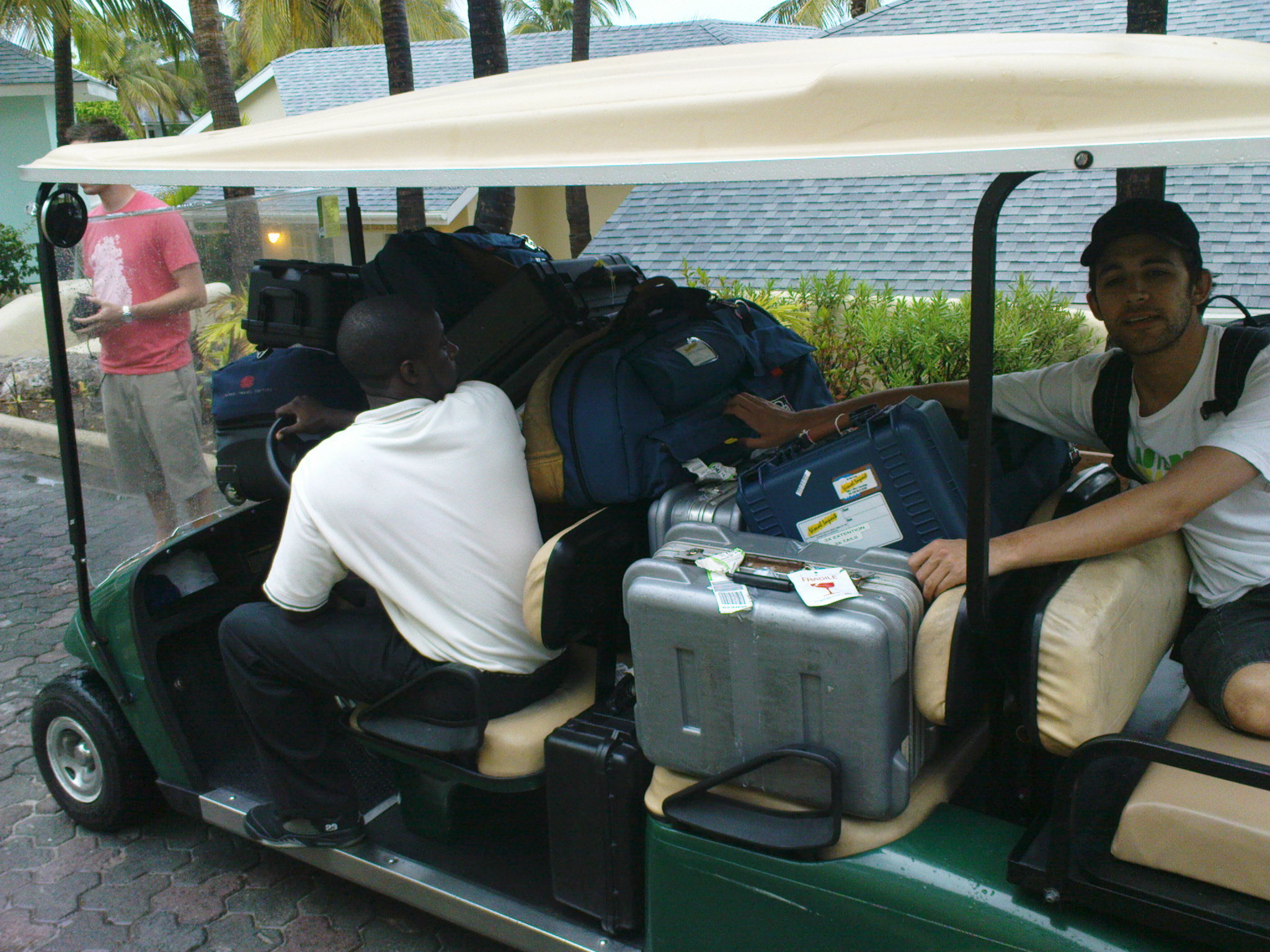 In the airline industry I have honestly heard baggage handlers reffered to as "throwers", this is not without good reason.  I once sat on a plane that had just landed and watched a man literally hurl our entire TV kit onto the truck below.  There were thousands of pounds of equipment (both in weight and money) but none of it suffered as it was all tightly packed away in trusted peli cases.

Most of the reviews on my site are accompanied with a comparison to other similar products, here this isn't necessary as you don't need to look much further if you want your kit well protected.   Peli cases are rock solid and they are the kind of things that you buy and then keep for a lifetime.  I worked for a company sometime back that had an ancient lens in a very old peli case that had travelled the world many times over and had an extremely tough life.  One of the catches had been damaged and so the company wrote to Peli to ask for a replacement catch.  Peli said the catches should never break and sent a brand new Peli case for free ... not just the catch an entire case!  Seriously, this case was old and had been hammered on many hundreds of flights, but no questions were asked, and the thing was replaced, THAT is customer service. 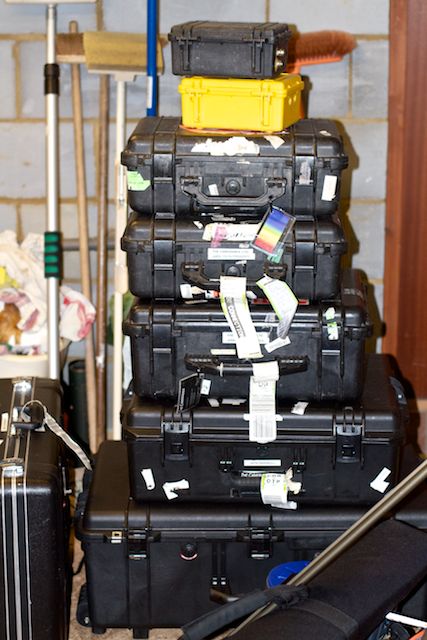 This is my personal collection and I'll admit it is probably getting a bit out of hand.

Peli cases come with 3 options for inner linings: laser cut foam, pick and pluck foam or velcro padded dividers.  I always go with the padded dividers, as that way I can adjust the various compartments when I buy new cameras and kit, or even when I am packing for certain jobs that require a certain amount of gear. 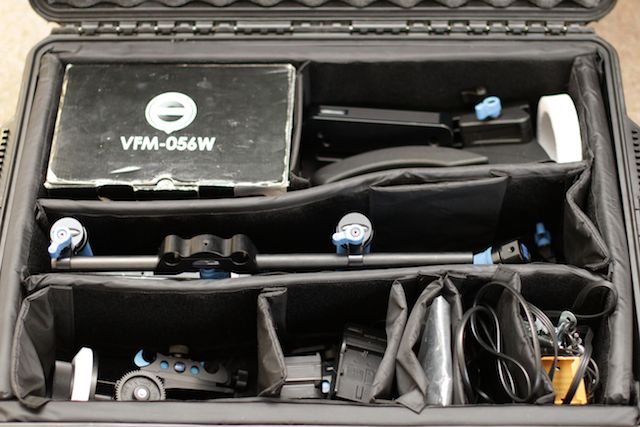 This is the Peli Storm IM2700  packed with my Redrock rig, a monitor a follow focus, batteries, chargers and other odds and ends.

The IM2700 is a good sized box, as fully loaded it is still manageable to carry around without wheels. 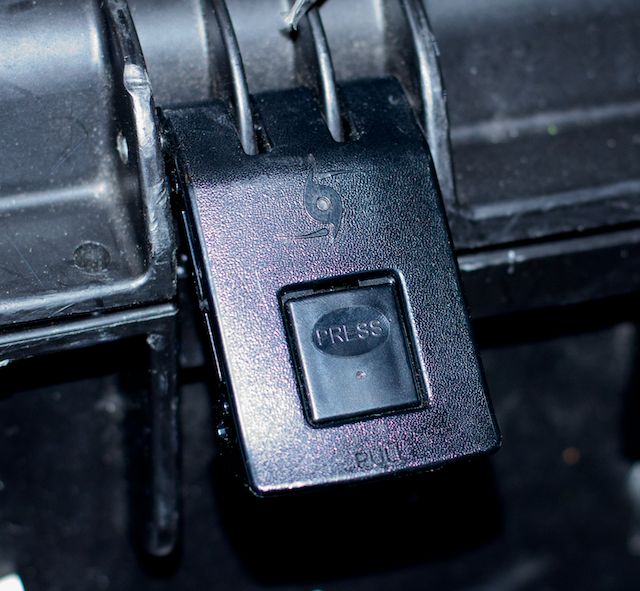 The locks on these cases are great, you need to push the button to open them, that way they are not going to accidentally pop open on a flight. 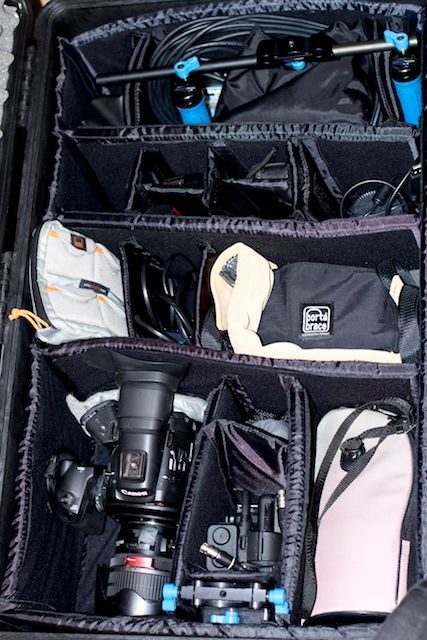 This is the largest Peli case I use.  By carefully packing this thing, I can get the Canon C300, several lenses, batteries, a shoulder rig, audio kit and a monitor, to give me a really mobile kit.

The Peli 1650 has wheels and an extendable handle so it is easy to move about with.  The one issue with a case as large as this is the weight.  When the case is fully loaded up it weighs nearly 30kg or 66lbs, most airlines will have a problem with this.  British Airways have an extra charge on bags over 23kg or 51lbs and most airlines have some kind of restriction on bags over 20-23kg.  This case is fantastic for holding large amounts of gear, just pack carefully before flying.