Some thoughts on the new Sony F5

The Sony F5 has entered the market, competing with cameras like Canon's C300 and RED's Epic 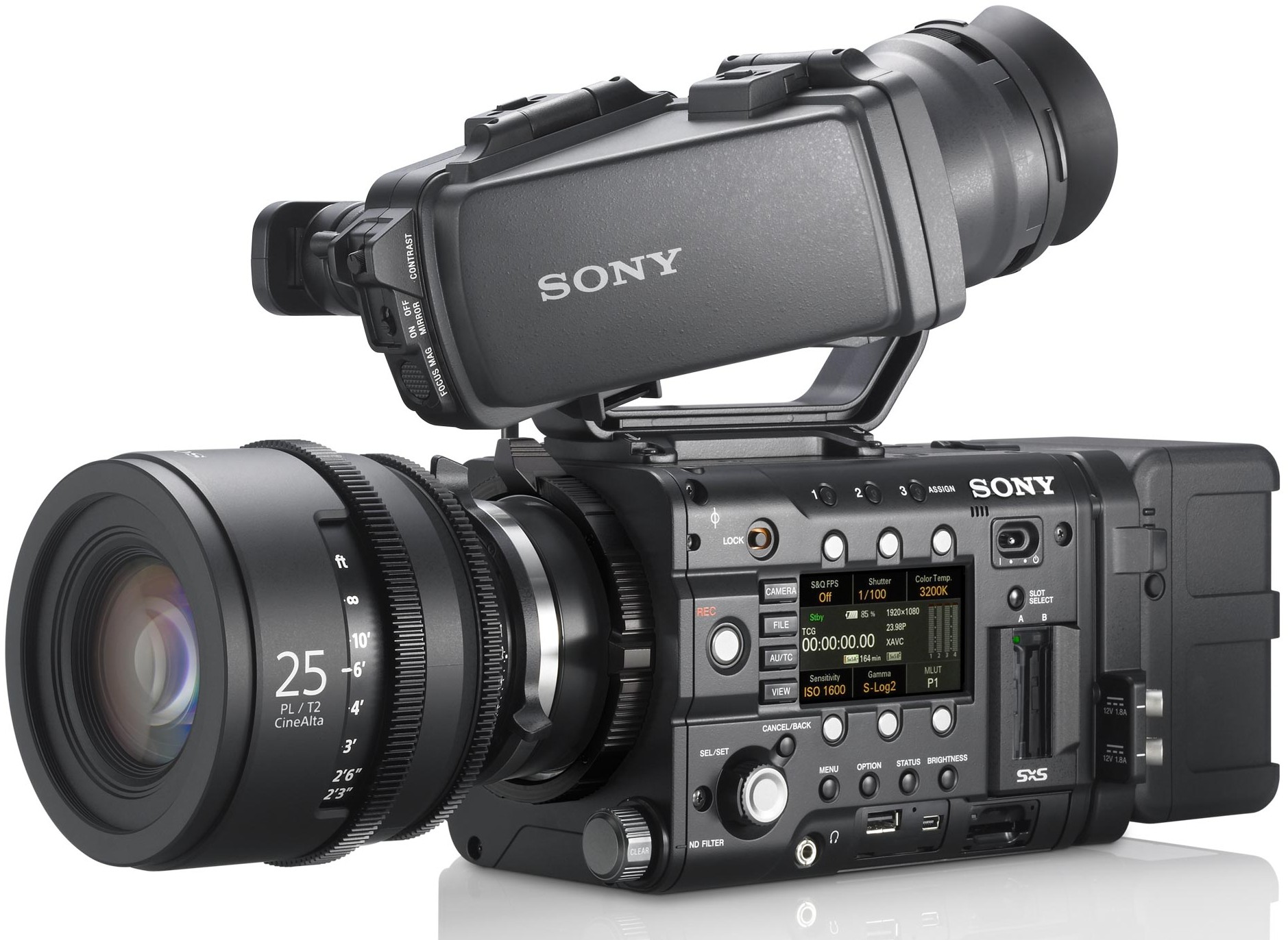 For the past few years Sony seemed to have been relatively quiet, whilst RED and Canon have been busy bringing cameras that have had huge appeal and must be taking a very significant chunk out of Sony's market.  Sony have now brought out a camera that, on paper, looks amazing and has aimed the price right where it will hurt Canon and RED the most. 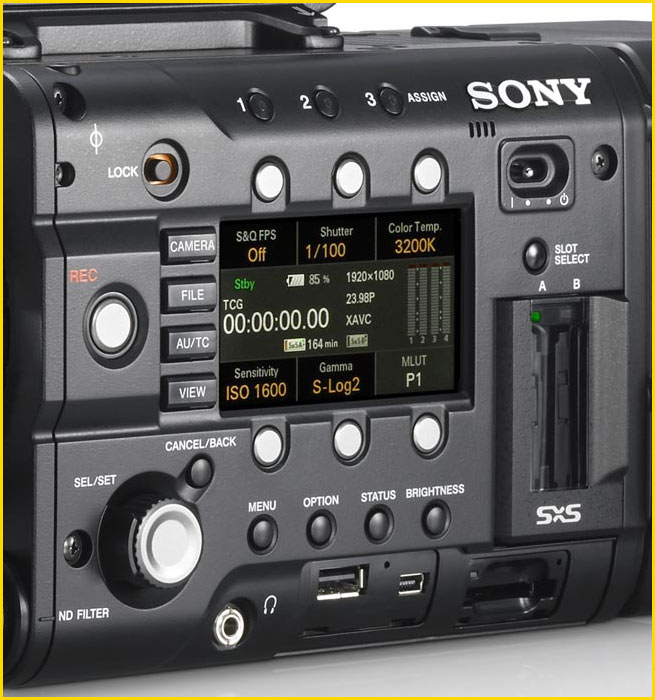 The side panel of the camera bares more than a passing resemblance to Arri's Alexa, which is no bad thing.  This is a panel that is well configured and easy to use.

Sony have been making cameras for professional, broadcast use for years, and it shows.  There is a lot about this camera that just makes sense ergonomically: XLR audio inputs are positioned at the base of the camera. (Unlike the C300/500 which attaches them to an LCD monitor, which firstly you may not wish to use, and secondly is higher than the lens, so you have to be careful not to let the cables get in your shot ).

Right next to the timecode is an "in/out" switch, what a great idea!  With the C300 that same function is located inside a menu, which isn't great when you are at the beginning of a shoot trying to hurriedly jam synch two cameras.

Having a proper viewfinder is really a massive selling point for me.  All other cameras in this mid range seem to have some sort of compromise: tiny tail eye pieces that block out the light but don't give you an image big enough to correctly focus and expose with, or flip out LCD screens that work great indoors, but are less good outside in bright sunshine.  Even work arounds for this such as external EVFs still  have issues, either they are not as easy to move around into different positions or the data from the camera, such zebras, digital zooms, peaking etc aren't transferred across. 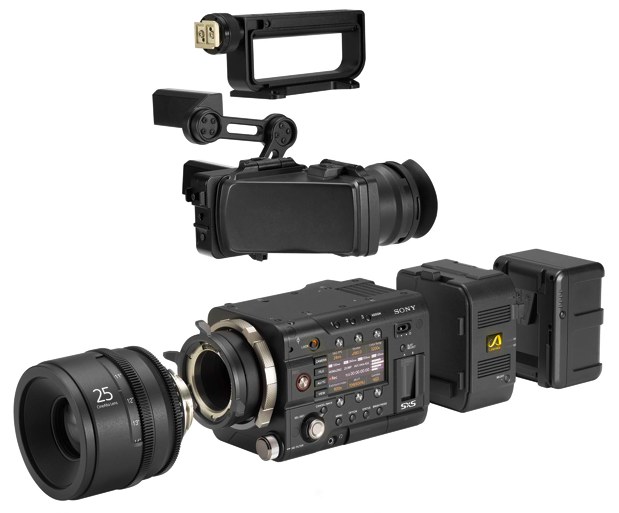 Another big selling point is the shape, this thing just looks like a decent block that is meant to sit on your shoulder.  The C300 is definitely too top heavy and can be a little bit awkward for handheld stuff.

The filter wheel is right where it should be (unlike the C300 that has buttons that feel exactly like all the other buttons on the camera, so not something you would want to use without taking your eye away from the eyepiece).

As far as the technical specs on this camera go they look very interesting.  First off it is able to record in MPEG 422 8-bit or  XAVX 422-10bit.   The frame rate goes up to 120 fps without cropping. However, this is an option, i.e you have to pay for it, as standard the camera shoots half speed (50 or 60 frames at full res).   There is also the external recorder that allows 4k recording .  This will cost an extra £3,599, but if you don't need 4k immediately it is a great way to future proof your camera.  Again this is something that looks ergonomically sensible: rather than an external recorder that has to be attached in some awkward, off-balanced manor, this thing just clicks seamlessly onto the back of the camera.

I bought a 2nd C300 only a 2 months ago, if the F5 was available then would I have bought it ?  To be honest, looking at the specs and the ergonomics, I would have to go with the F5.  That said, whether you have a C300 or a Sony F3 or whatever it, you will still be able to make your money back on it, and that is what matters.  Those cameras still both produce amazing images.

Broadcast calimed that CVP has ordered 100 of the F5 and Toptechs 40, so it is already looking like a popular option.

Update.  Since I wrote this back in November of last year, I have had a chance to use the Sony F5 a number of times.  The first obvious thing about it is the heft and weight of it, if feels more solid than I expected and not at all pastic-y.  There are 4 mount points on the top of the camera, which is great for the top handle and other accessories.  Arri have made plate for the F5 and F55, which has a cheese plate for multiple mounting options of monitors etc and a top handle.  This is a defiinite advantage over the C300 which only has one small screw.  I also like the fact the the F5 can be rested on the floor, this sounds like a simple thing, but it is quite important, I often find myself passing the C300 to someone to hold just because if I put it down anywhere it will tople over, which isn't great.  When I first used the camera I realised the minimum iso was 2000, 2000!!! minimum.  I thought I'd made a mistake at first, as most cameras (C300, RED, Alexa etc ) tend to be rated around 800-850 iso, so you would imagine this thing will work pretty well in low light conditions.

I really like the look of the F5 in S-Log even straight out of the camera.  The image isn't so flat that you need a different looking profile to help you find focus (as you might with the Alexa or C300).  There are plenty of options out there to attach moose bars, shoulder pads etc to allow you to shoot handheld.  With the C300 I tend to add on additional weight behind the camera to help the balance, but this isn't necessary with the F5 as the camera is longer and less tall and makes a bit more sense ergonomically.

Overall the camera is fairly straight forward and simple to use, if you are used to using Sony cameras.  The menu is prety extensive and there are lots of options as you would expect.  If you have a job booked in with one of these cameras and you haven't used it, it is well work having a look at the online simulator.

The camera comes with a Sony mount, which you then need to add an adapter to if you want to mount a PL lens.  This seems slightly odd to me, to buy a camera that comes as standard with a mount that you will never use.

If you are deciding between a C300 or an F3 a big consideration is obviously going to be lenses.  With the C300 you can choose PL or EOS mount with the F3 it is just a Sony mount which you can then adapt to PL mount.  Now to really confuse matters Arri have the Amira, which will be available in B4 PL or EOS.

Here is an F5 online simulator if you want to look at the menu systems.